​Being afraid is a natural human response to situations that in our brain appear to be life threatening. Statistically speaking, people fear public speaking far more than death. This seems irrational. Nevertheless, the social implications of public humiliation could carry everlasting repercussions. Public opinion after death is not really a concern. This is why, stage fright is a very powerful enemy and, as performers, we must know how to disarm it time after time.

In this brief video, Nune Melik shares her point of view about stage fright and helps us understand that stagefright is an enemy that will come watch us perform for as long as we live. For this reason, we must accept it and understanding it. According to Nune, prior proper preparation is most effective way to tame this enemy the right way. What do you think? 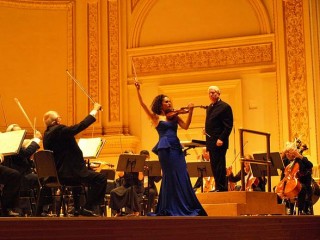 As a soloist and chamber musician, Nuné has performed throughout Russia, Canada, the United States, Germany, Denmark, Italy, France, Armenia. She has collaborated with Konstantin Orbelian, Nurhan Arman, David Gilbert. ` has also appeared as a soloist with the Sinfonia Toronto, Senior Orchestra of New York and Moscow State Chamber Orchestra. Since 2015, Nuné Melik has held an Artist-in-Residence position in the Miami Chamber Orchestra.

Exploring new repertoire since 2010, Nuné advocates and promotes the music of her heritage. A specialist within the music of the Caucasus, she has performed and lectured in venues like Columbia University (New York), Wayne State University (Detroit) and Naregatsi Arts Institute (Erevan). Her future engagements include Harvard Club of New York and the Jeunesses Musicales Canada tour. She was recorded and later broadcasted on CBC radio. Her CD "Hidden Treasure", recorded at the Yamaha Artist Studio in New York and McGill University includes the unknown works of Armenian composers for violin and piano. Nuné Melik was an invitee artist of multiple festivals and series such as Montreal Chamber Music Festival, Passion Classica, Musical Armenia, Strad for Lunch (New York), Water Island Festival (St. Thomas) and 1000 de Maurienne (France). Among the other Nuné Melik has performed at are the Weill Recital Hall at Carnegie Hall, Toronto Arts Center, Merkin Hall of the Lincoln Centre (New York), Bolshoy Hall and International House of Music (Moscow), Palais Mont-Calm (Quebec city) and Salle Claude Champagne (Montreal).

Do You Think You're In The Middle Of Nowhere?
Did you think it was too late and pointless? Think...